Kathmandu, Oct 29 : Nepal Sambat 1140, the New Year marked by Newari community, began today. The Nepal Sambat was launched in 937 BS (880AD) by the national luminary Shankhadhar Sakhwa by lifting people out of poverty with the monetary assistance to pay loan.

The Newar community of the Kathmandu Valley and Banepa, Dhulikhel, Bahrabise, and Bhimeswor of Dolaka observe the Nepal Sambat with fanfare. Then Prime Minister Krishna Prasad Bhattarai in 2056BS had announced Sankhadhar Sakhwa as the ‘national luminary’ in recognition to his contribution to lift poor people out from poverty and initiating the original calendar. Similarly, in 2065 BS, then Prime Minister Pushpa Kamal Dahal had announced the Nepal Sambat as the national calendar.

On the occasion of Nepal Sambat 1140, the Newar community, guthi, khala, and cultural and literary organizations welcomed the New Year with much happiness today. They took rallies, pageants and organized programmes depicting cultural identity. A grand programme was organized at Basantapur.

At the programme organized by Nepal Sambat 1140 Nhu Daya National Celebration Committee, Deputy Prime Minister Ishwor Pokhrel reminded that government was for the protection of culture, tradition and religion by preventing encroachment to guthi. He ruled out the news that communist government was bringing guthi bill against guthi tradition. “Government is for protecting guthi culture in special manner,” he stressed. 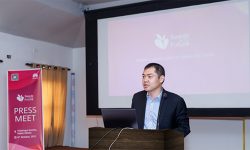